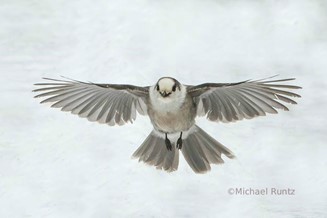 Dan Strickland is recognized as the leading authority on Canada Jays and, indeed, in 2018, was the person most responsible for persuading the American Ornithological Society to formally restore “Canada Jay” as the bird’s official name. Canada still doesn’t have a “national bird” but many birders, including club president Michael Runtz, would give top marks to this hardy, amicable bird epitomizing the Canadian identity.

Michael, too, has high praise for Strickland, our October guest speaker, as a “friend, mentor and boss,” rooted in Algonquin Park.

Making full use of any spare time in his Algonquin years, Strickland studied the Canada Jay, contributing to a research program now over 50 years old and one of the longest running ecological investigations of its type in the entire world.

Canada Jay numbers were declining by 50 per cent three years ago, when bird researcher Alex Sutton spoke to our club on the study. But at the time, Sutton also had some good news about a bird whose numbers had been slowly sinking.

Has the outlook changed?

Be sure to join us at 7 p.m. on October 6 for Dan Strickland’s much anticipated update.