The Macnamara Nature Trail in the southeast corner of Arnprior is a window into the past and present natural world of the region. The club’s largest project, its boardwalks, viewing platforms and benches let visitors explore it without disturbing its wild character. A new 1.5-km trail extension — the Nopiming Loop — provides an enhanced nature experience and improved observation of the wetland by Goodwin Bay. 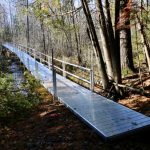 The Macnamara Trail Guide,  downloadable in interactive pdf, provides a vivid explanation of the flora, fauna, and human history on view. The trail is made possible by the co-operation of the landowner, Nylene Canada Incorporated, the generosity of the K.M. Hunter Foundation, and the dedication and hard work of club members and community volunteers.

It leads visitors past 19 numbered stops along four kilometres (with an optional half-kilometre branch that leads to a rocky point overlooking the mouth of the marsh where the marsh meets the Ottawa River. Many of its features were re-“discovered” (Algonquin people had known them in the traditional way for centuries) by Charles Macnamara, the club’s namesake, nearly a century ago. When he found a beaver lodge, he lobbied the Ontario government to declare their lands a game sanctuary, since the species was on the brink of extinction from the fur trade. 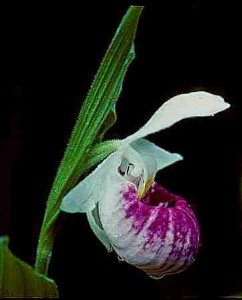 Among the many plants is the Showy Lady’s-slipper (shown at right), the club’s emblem, a spectacular orchid with one petal enlarged to serve as a landing platform for insect visitors. The pink to red pouch, open at the top, is designed to enlist bees as pollinators. It’s visible between late June and mid-July. Other wildflowers include blue vervain, Joe-pye weed, swamp milkweed, jewelweed and boneset.

On the geological front, many of the exposed rock outcrops consist of marble, which can be transformed by fire into useful lime, and the ruins of an old lime kiln are still here. Among other flora on view are the walking fern clinging to the rocks, a bitternut hickory tree, striped maple and hobblebush shrubs, and a multitude of mosses and fungi.

The Macnamara Nature Trail is on private property, made available for the protection, study, and enjoyment of nature by its owner, Nylene Canada Inc., and managed by the Macnamara Field Naturalists’ Club. Activities not consistent with this purpose are not permitted on the trail or in the Nopiming Crown Game Preserve. These activities include hunting, logging, harvesting wild plants, ATVs, snowmobiles, mountain bikes, and bringing dogs onto the trail. Dogs are not permitted on the Macnamara Nature Trail. Accordingly, anyone found not respecting the rules including bringing dogs to the trail will be asked to leave. If they refuse to do so, or if they are repeat offenders, they may be charged with trespassing as the Macnamara Nature Trail is private property.

How to Get There

Download a pdf of our interactive Macnamara Nature Trail Guide with links to numbered stops. This guide does not include the Nopiming Loop, which was added in 2019.  We are working on an update.