Christmas bird counts (CBCs) are the earliest form of what has come to be known as “citizen science” – ordinary people observing the natural world to satisfy their own enthusiasm, and recording what they see as a way of providing data for trained scientists.

CBCs began in 1900 in reaction to a holiday tradition that saw hunters choosing sides and going afield with their guns; whoever brought in the biggest pile of dead feathered (and furred) quarry won. Beginning on Christmas Day 1900, ornithologist Frank Chapman in the early Audubon Society proposed a substitute “Christmas Bird Census” that would count birds in the holidays rather than kill them. So began the Christmas Bird Count. Thanks to Chapman and 27 other dedicated birders, 25 CBCs were held that day in locations all the way from Toronto to Pacific Grove, California.

Today, counts are organized under the auspices of the National Audubon Society during the Christmas season. Volunteers are assigned areas to cover and set out usually in teams to see what birds are there. They count every bird – European starlings and rock pigeons are accorded the same importance as a wintering thrush or a rare gyrfalcon. Teams compete in a good-natured way and results are usually tabulated in a festive setting (read “lots of food and drink”). Results are transmitted to national headquarters and provide a valuable, wide-ranging survey of bird populations.

The Pakenham-Arnprior Christmas Bird Count (CBC) is steeped in history. Two of the earliest counts held in Canada were formerly conducted in the area covered by the current Pakenham-Arnprior CBC.  The first was the Arnprior CBC, which ran from 1913 to 1939 (the latter years seem to be not recorded with Audubon and apparently no count was held in 1933). All through its existence, the Arnprior CBC had but two participants: Charles Macnamara and Liguori Gormley.  Covering the count only by foot, Macnamara and Gormley tallied an admirable 42 species. Those who feel the current count’s date of Boxing Day is less than desirable should be aware that the Arnprior counts were held on Christmas Day, a reflection of the unmarried status of its participants!

The second Christmas Bird Count to arise locally was the Pakenham CBC, initiated on December 23, 1925 by Edna Ross and her brother Allan Ross. Their sister Verna added her name to the count “Rosster” the following year and in 1931 brother Wilmer joined the group, keeping it a family affair. Verna continued to participate right up to 1999, the year she turned 92!  The Pakenham CBC was not held in 1956, the year Edna was travelling abroad, or in 1957, due to her illness.  Thus, between 1925 and 1939, remarkably not one but two Christmas Bird Counts were held in much of the area currently covered by the Pakenham-Arnprior CBC.

In 1970, the count circle (with a standard 7.5 mile radius) was shifted slightly to include more of the area covered under the original Arnprior Count, and the name “Pakenham CBC” was changed to the current “Pakenham-Arnprior CBC” not only to reflect the slight change in the count area but also and more importantly to recognize the two historic counts from which it arose.

Between 1913, the year Charles Macnamara and Liguori Gormley set out on foot to conduct the very first local Christmas Bird Count, and 2015, the most recent count, which had more than 40 participants, a remarkable 126 species have been recorded (six new species were added in 2015!).  It is noteworthy that less than half of all of those species have been exclusively encountered on “Pakenham-Arnprior” counts; the two early counts run by a mere handful of people, and often conducted solely on foot, collectively tallied a remarkable 64 species.

Naturally, with more observers and a developed knowledge of where birds are in the count area and how to find them, the average number of species per count has risen. For the past 15 counts, the average total has been 54 species. The record is 66 species tallied in 2001.

Some fascinating history of birds in this region has been documented on the local CBCs.  For example, the first European Starlings to be recorded on the Arnprior Christmas Bird Count were 33 individuals tallied in 1926 (the first of this species to be seen in Arnprior was “collected” in April 1922); in that very same year, six were recorded, also for the first time, on the Pakenham CBC.  Another species that has moved into this area is the House Finch; it was first recorded on the Pakenham-Arnprior CBC in 1984, a mere year after this species was initially observed in the Arnprior region. Currently, this “new species” appears to be on the decline; even more dramatic is the decline of European Starlings and House Sparrows. In 1998, 1,964 European Starlings were tallied; in 2015 the count was 528. House Sparrows have shown an even greater decline: in 1985, 2,011 were tallied while in 2017 only 81 were recorded. Bald Eagles, on the other hand, have become common, and are expected on every count; 28 were recorded on the 2014 count and 26 tallied in 2017.

Wild Turkeys (a non-native species released in our area) was first recorded on the count in 1999, and now are common. Two formerly rare “native” species – Merlin and Red-bellied Woodpecker – are now regularly tallied. Merlins have recovered from their DDT-induced decline while Red-bellied Woodpeckers are southern birds expanding their range northward, likely due to climate change.

For the results of various CBCs, see: http://birds.audubon.org/christmas-bird-count.  On that site, you will find options for searching counts by province or state, count, or species.  If you wish to see the historical results of our counts, the Arnprior counts are found under “Arnprior” while the Pakenham counts are listed under “Pakenham-Arnprior (ONPA)” and are the years 1925 to 1969.   It appears that when a count goes through a name change, the counts held under its earliest name are listed under the count’s new name.

This summary lists each species recorded on the three local Christmas Bird Counts, its highest count and the year of that record.  If the record number is the same for a large number of counts, then only the most recent year is given and it is demarked with an asterisk.  If a species has been recorded on fewer than ten CBCs, the number of times it has been observed is given; if more than ten CBCs, it is denoted as “>10.”  All of the specific Christmas Bird Counts on which a species has been recorded are also listed:  “A” stands for Arnprior; “P” for Pakenham; and “PA” for Pakenham-Arnprior. 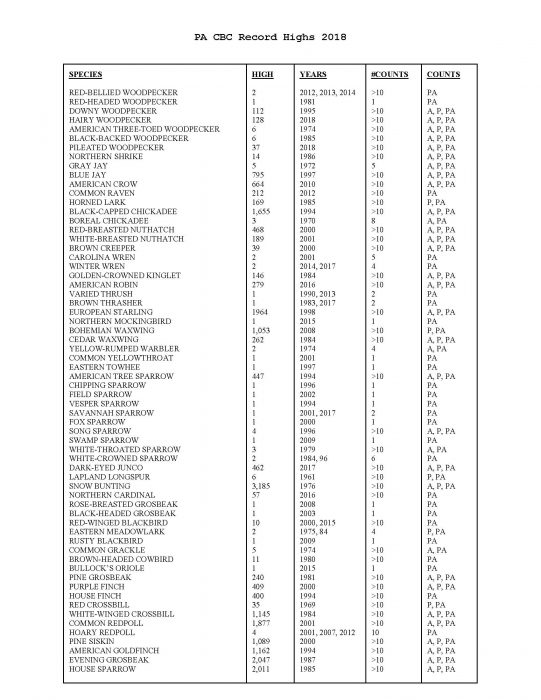