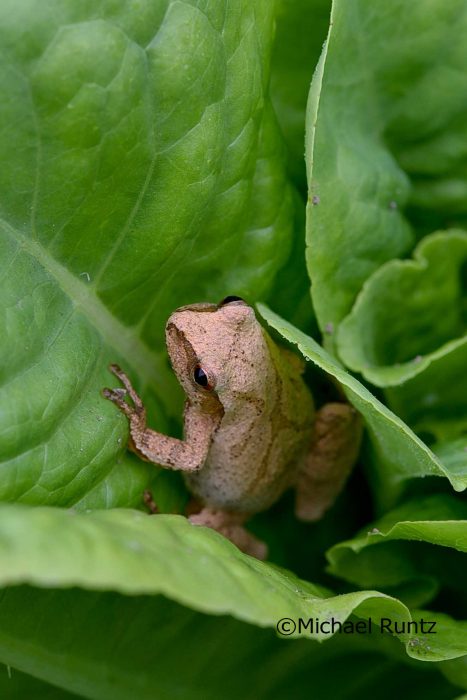 The loud, shrill peeps being heard at night are uttered by remarkably tiny Spring Peepers

Nature never fails to amaze. Every time there is a challenge to solve, she comes up with not one but myriad solutions.

For example, sub-zero temperatures cause problems for all living things. Water inside animal bodies turns to ice and cells burst, destroying tissues and causing death.

To prevent this, some animals put on layers of fat and extra hair or feathers for insulation. Others lower their heart rate and body temperature, entering a deep sleep called hibernation. This takes place in sites that remain above the freezing point.

They survive in two ways. One is by pumping antifreeze into their liquids to keep them fluid regardless of how far the mercury drops. This is called “supercooling.” Most insects that spend the winter above ground supercool.

The other way is to keep cell contents from freezing but to allow ice to form between the cells in a controlled manner. This behaviour is called “freeze tolerance.”

After a very long winter, amphibians are finally beginning to stir. Recently the rocking chair creaks of Chorus Frogs, the duck-like quacks of Wood Frogs and the shrill peeps of Spring Peepers have been heard.

These frogs, along with the soon to-be heard Gray Tree Frogs, are unusual in the amphibian world because they don’t spend winter dormant in the bottom of lakes and large ponds (as do Bullfrogs and Leopard Frogs) but are held in the grasp of the frozen ground.

In the autumn those frogs bury themselves under the soil and freeze as the earth around them freezes. These frogs are freeze-tolerant! During the winter, freeze-tolerant frogs lie lifeless and frozen in the ground.

More than half of their body is frozen with only their most vital of organs are protected from freezing. When warmer temperatures reach their bodies, the little frogs slowly thaw. Almost immediately after coming back to life, they seek out the first ice-less ponds from where the males fill the night air with their strident calls.

Being freeze-tolerant offers two big advantages over other frogs.

They do not have to perform dangerous migrations in the fall to reach favourable overwintering sites.

And most importantly they awaken early in the spring while larger bodies of water remain icebound.

These frogs prefer to mate and lay their eggs in small woodland pools known as ephemeral ponds.

Ephemeral or spring ponds are often created by melting snow and are important sites for freeze-tolerant frogs as well as salamanders. The pools lack fish and thus are safe sites in which to lay eggs and have tadpoles develop.

The downside is that the ponds dry up quickly, so the users must have very short development stages.

After all the snow we have had this winter, plus the current flurry of showers, there should be plenty of ephemeral ponds this year.

This could well result in an even louder chorus of the Lazarus frogs next spring.