A year in the life of a black bear: it’s all about food 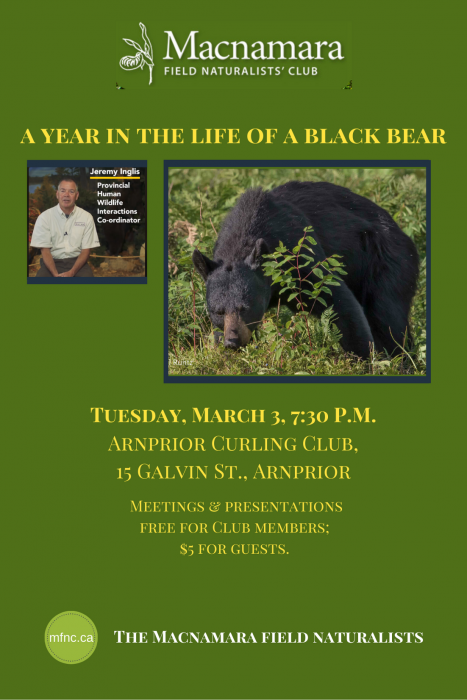 Black bears have an unparalleled sense of smell — especially for food-related scents— and are known to travel kilometres when they catch the scent of food. But that nose can also lead to trouble — with humans.

Bear expert Jeremy Inglis, guest speaker for the MFNC’s March 3 meeting, knows way more than most about this clash.

In 2004, for instance, the Ontario Ministry of Natural Resources (OMNR), which manages and protects black bears in our province, launched the Bear Wise program to address public safety concerns about human-bear conflicts. Inglis, who has worked extensively with bears for more than 30 years, played a key role in its development; the related Be Bear Wise video has had thousands of views since it was introduced in June 2019.

Found throughout most of Ontario, our black bear population is estimated by OMNR at 75,000 to 100,000 bears – the second largest in North America, where an estimated 800,000 roam the continent.

And locally, driven by their biology, they’ll soon be leaving their dens, drawn outside their normal forested areas by their acute need for food — the where and why most human-bear conflicts arise.

Absorb the fascinating details from the Ursus expert. Inglis outlines, “We’ll explore a year in the life of a black bear; when it hibernates, when it is seasonally active, where it travels, its breeding cycles and cubs, its occasional trouble with humans and, perhaps most importantly, the feast or famine cycle that drives almost everything bears do.”

Don’t miss: A year in the life of a black bear in Ontario and why they sometimes come into conflict with humans

Find more information on the Club and its activities at mfnc.ca.