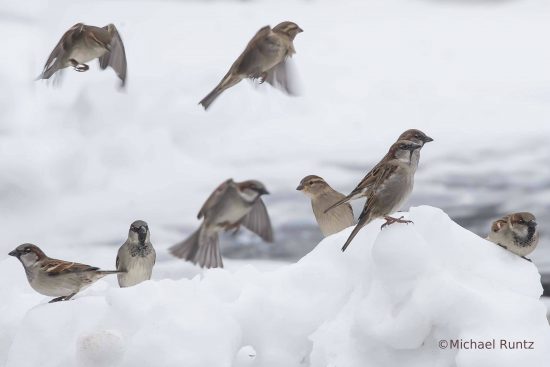 House Sparrows have declined from the record high count in 2,011 in 1985 to this year’s 151, a trend that is being noticed world-wide. This group was part of a flock of 35 found at the Arnprior Humane Society in Arnprior.

The 2019 Pakenham-Arnprior Christmas Bird Count (CBC) was my 54th consecutive one (it was called the Pakenham CBC when I first took part but despite popular opinion, cars had been invented by then!). Many of you have been participating for 20 years or more, with Ryan Zimmerling accompanying me on 31 consecutive ones! Britta Herrmann joined Ryan and me in her first appearance on this historic count. The three of us had a great day, starting off by squeaking in two adult Northern Goshawks and two Barred Owls!

The starting temperature was a mere -5°C with only a light wind (5 to 15 km east), and the temperature hovered around -4°C all day. This made birding through the day enjoyable although the threat of freezing rain resulted in a number of the 32 field observers (ten fewer than last year) ending their day a bit earlier than usual and unfortunately missing the compilation at day’s end.

No new species were discovered this year but among the 47 species tallied (well below the ten-year average of 55), as usual there were some good finds.  A Golden Eagle (by Alice Tremblay and Vincent Fyson) was the sixth record for the Count, as was a Short-eared Owl (by Britta Herrmann and me). A female Hooded Merganser (by Bernie Ladouceur) was the ninth record, as were two Northern Saw-whet Owls (heard also by Bernie).

A large fruit crop on many trees (ash, mountain-ash, buckthorn) was no doubt behind the 26 American Robins that were tallied, but surprisingly no waxwings were recorded.  Other notable absentees included Common Merganser, a species observed each year in at least two locations in the count circle.

With the exception of American Goldfinch, finches were poorly represented. There were no Evening Grosbeaks, a species that last year showed up in better-than-usual numbers, leading me to speculate that this year’s count would tally even more. Oops! Massive seed crops farther north and west have kept northern finches from making their way down here, thus a small group of five White-winged Crossbills feeding on seeds in a tall White Spruce in the Nopiming Game Preserve was a pleasant surprise.There were no Red Crossbills or Common Redpolls, and only one Pine Siskin was tallied on the count. Only five Purple Finches were found, and House Finches continued their decline, with only six being recorded on the count this year. Despite good conditions for hearing woodpeckers tap, low numbers of all three regulars were recorded. Yet, there was a fair amount of bird activity in the woods this year, with plenty of Blue Jays, White-breasted Nuthatches and Black-capped Chickadees present.

A heartfelt thanks to all those who participated in this year’s Pakenham-Arnprior CBC, either as field observer or feeder watcher. And a big thank you to Marilyn Snedden for once again hosting the compilation at her lovely home.

I look forward to seeing all of you on the 2020 Pakenham-Arnprior CBC!

Unusual species are bold-faced; the number of times recorded on the count appears in the brackets