Most of Ontario’s reptile and amphibian diversity occurs in southern Ontario, where road density is among the highest in Canada (Ontario Nature 2012); sadly, mortality from vehicle strikes is a very real threat for many of the above. And when it comes to snakes, that slaughter is often deliberate. One factor why: nearly one-third of adults globally are said to have Ophidiophobia—a fear of snakes (FEAROF.net).

Involved in ORAA from 2009 to 2019, Jakob Mueller, President of the Ottawa Field Naturalists, finds such negative actions disturbing. Herpetology—the scientific study of reptiles and amphibians—is one of his special interests. Looking him up on iNaturalist you’ll find he has participated in four projects: Canadian Amphibians & Reptiles on Roads, Reptiles & Amphibians of Ottawa and Eastern Ontario, Wildlife on roads in Ontario and Global roadkill observations and made some 1,413 observations of 602 species alive or dead.

As well, as of October 24, he had identified some 21,728 entries submitted by a range of contributors.
Snakes are clearly his favourite. Pantherophis*, his identity on iNaturalist, is a clue! 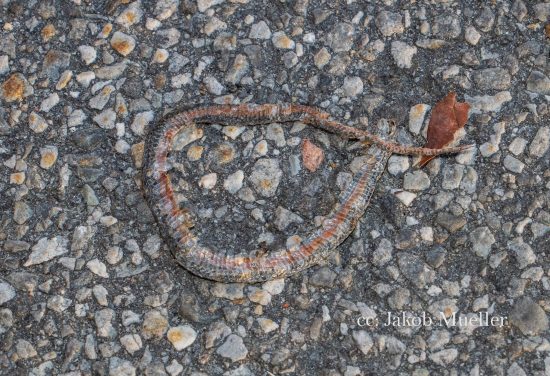 *a genus of nonvenomous colubrid snakes endemic to central and eastern regions of North America and consisting of North American ratsnakes, foxsnakes and cornsnakes. Wikipedia.

“Despite inspiring some undeserved negative reactions in some people, snakes are fascinating creatures, quite important locally and quite interesting,” Mueller notes.

“Most people are familiar with the omnipresent garter snake, but are unaware that eight species have been recorded inside the Ottawa district, with a ninth nearby,” he adds.

Got your interest? Zoom in on November 3 for his presentation to our club on the reptiles and amphibians in the Herpetological Mysteries of Eastern Ontario.