Art Goldsmith, a long-standing member of the MFNC, worked at Parks Canada and Environment Canada for many years. As part of the Biodiversity Convention Team, he assisted in the establishment of the UN Secretariat of the Convention on Biological Diversity. His boyhood interest in nature developed into an understanding of and lifetime commitment to ecology and conservation.

The comparative diversity tour will begin on the east and west coasts of Canada, Alaska, and Yukon, where species are adapted to the varying ecosystems, including many birds which we sometimes see migrating. Species similar to those in our area, and some species we never see are also featured. On our travels, we’ll see how diversity tends to skyrocket as we go south and into nearshore marine ecosystems. Speciation is of great interest to ecologists and there are some great courses at Carleton and Queen’s if you wish to go deeper into the topic.

European species also show so many similarities, and differences. The similarities point to our continents being joined at some point. We will venture to Spain, where some astonishing efforts are being made to conserve biodiversity. Photos of key and noteworthy species will be presented.

The last part of the presentation will take us from the more biodiverse American south back home along the Atlantic coast and inland to our Great Lakes/St. Lawrence Region where the Eastern Flyway for migrating birds is featured. We will also enjoy seeing ecological changes as one goes from South to North. Just for fun, and because it is something I only know about because of Michael, Bergmann’s rule will be explored. 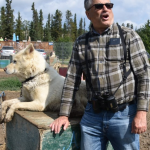 Art Goldsmith is a long standing member of the MFNC and worked at Parks Canada and Environment Canada for many years, particularly with the Biodiversity Convention Team where he assisted in the establishment of the UN Secretariat of the Convention on Biological Diversity. This is very boring as Art said!

Art’s boyhood interest in nature developed into an understanding of ecology and conservation. His career in Parks and Environment Canada occasionally interfered with his studies of wilderness. However, Art is now dedicated to his own conservation and ecological studies and his exploits can now be followed at: artnatureculture.blogspot.com.